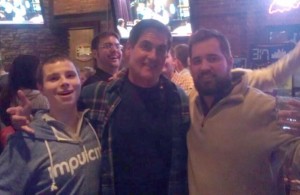 Like, Dave McClure, entrepreneur, Dallas Mavericks owner and investor Mark Cuban is a strong advocate for starutps outside Silicon Valley, “everywhere else” as we call them here. It seems that almost every time Cuban is asked to speak at a startup investor conference or in front of entrepreneurial students, someone asks him about the next bubble.

Cuban is a self made business man all around. One of his earliest business endeavors was selling computers. The kicker though was that he didn’t even own one. He read manuals and documentation on whatever he could about computers working for someone else, until he ventured out on his own.

His earliest success came during the first dot com “bubble” when he sold Broadcast.com to Yahoo in 1999 for $5.7 billion dollars. Not too shabby. He was able to parlay that into purchasing the Dallas Mavericks and founding HDnet which is now axs.tv.

Cuban has spead his latest investments around. He’s invested in companies (outside of Shark Tank) in Los Angeles, New York, Atlanta and other cities, keeping his portfolio out of harms way in the event of a Silicon Valley bubble 2.0. And that’s just where he thinks the next bubble will occur.

He doesn’t think the next “bubble” will actually be a bubble but rather the results of a pyramid scheme or modern day chain letter.

“It’s almost the 2011 version of a private equity chain letter,” Cuban said, as reported by PEHUB.

“Remember the old chain letter, where you put up some money, then you got other people to put up some money, and you gave it to the people who were in the deal before you? That’s what’s happening today,” says Cuban. “The early [VCs] are getting the new [VCs] to invest enough money at high enough valuations that they get most, if not all of their money back. Then the next round [sees] someone else invest more money at a higher valuation, returning cash to the last two rounds of investors. By the time you get to the last [VC] standing, those last few rounds hope they can get a return from the public markets. That may be very tough. But the only players really on the hook are the guys from the last rounds. Just like in a chain letter.”

Lately there’s been a lot of talk as to whether Silicon Valley is on the brink of another bubble explosion. The first one saw startups quickly become brand names like Pets.com and Toys.com, and then just as quickly evaporate into a bankrupt land of nothingness.

Several things over the last three months in particular have caused investors to look more cautiously. Back in mid december the Dow Jones VC Edge report came out. That sent a tremor through Silicon Valley and New York City. Fred Wilson blogged about it as a signal that there was a “Series A Crunch” coming. That same week Paul Graham the founder of YCombinator shook things up some more when he reported that startups in the world famous accelerator program would receive less seed funding and that they were taking less startups in the next YC class.

Today, people are watching anxiously as companies like Zynga and Facebook were expected to make billions in IPO’s and then carry investors off into the sunset. That didn’t happen for either company, Zynga much worse off today than Facebook, and that was all in the last year.

Cuban banks on winners, in fact on and off the court he says “No one hates losing more than me”. He’s practical though and knows not everything he invests in is going to have  $5.7 billion dollar exit but he’s going to work relentlessly to insure as much success as possible.

What he does say though is that eventually, like with a chain letter, Silicon Valley investors are going to be left holding empty envelopes. He won’t be one of them.

“When the market has a correction, stock prices will correct dramatically, and that sound you’ll hear from the Valley?” says Cuban. “[It] will be of a fund manager screaming, ‘Shit!’ as he turns out the light on his fund.”