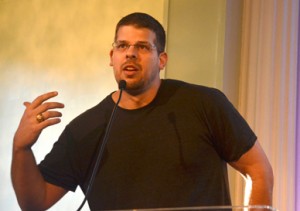 Can startups be built anywhere in the United States? That’s a question the Wall Street Journal Accelerator’s blog and the Huffington Post have recently asked. Between those two widely read publications and last weeks everywhereelse.co The Startup Conference, the answer is a resounding “Yes”. Just to reiterate that though, Atlanta’s startup community came out in full force Monday night to tell their stories in a “Startup Georgia Parade”.

There was no confetti, or marching bands, but the grand marshall, Scott Case (CEO of Startup America and founding CTO of priceline.com) was in his trademark red, white and blue Chuck Taylors.

Rather than 50 foot floats, the standing room only crowd at the historic Biltmore Hotel in Atlanta celebrated multi million dollar companies, entrepreneurs, founders and investors who’ve chosen to keep themselves, and their businesses in Atlanta.

Event organizer Scott Henderson, pointed out several times that, Monday’s event, dubbed “Startup Rally” was the largest assembly of startups and entrepreneurs since the International Cotton exposition, a 100 day exposition held in Atlanta 118 years ago (1895 for those that don’t want to do the math).

One of the first startup founders to speak was Rob Kischuk founder of Bad.gy. He was quick to point out that just the previous week he was at everywhereelse.co with 1000 other entrepreneurs and startups, using that as testimony to the fact that startups can launch just about anywhere. Kischuk almost got emotional when talking about his decision to stay in Atlanta and that he would have it no other way.

He was lucky that major investor Mark Cuban, is all about raising startups where they are born. Kischuk also commented on how relationships built through Startup America, and specifically with Scott Case, helped engineer a relationship with Cuban that eventually led to a financing round. The introduction to Cuban was made at our co-founder Nick Tippmann’s Shark Tank party as part of Super Bowl festivities in 2012. (You see how fast that happened?)

Finally Kischuk recognized that many of the people in the room at Startup Rally, the influencers of the Atlanta startup community were instrumental in the success bad.gy has had to date.

Find out more about bad.gy here 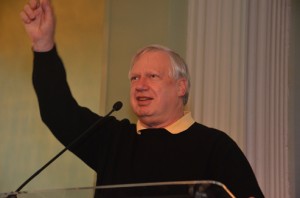 Every state seems to have a godfather of early stage startup funding. In Tennessee Vic Gatto of Solidus is the godfather. In Atlanta it’s Sig Mosley. Mosley was an early stage venture capitalist, took a short hiatus but couldn’t stay away. He stood on stage and talked about the technology sectors that would build the next stage of companies in Atlanta.

Jim Flannery the founder of Four Athens spoke about coming to Athens Georgia with nothing, in fact he moved from Silicon Valley to Athens Georgia, a town made famous by REM and the B52’s. Now they have their own budding startup community. Four Athens serves as the hub for entrepreneurs in the Athens area. Sam Zebarjadi, a wireless entrepreneur, and mentor for both Four Athens and Greenville’s “Iron Yard” also spoke about startup communities, and the power in Georgia.

Paul Judge, an Atlanta based serial entrepreneur has already had two exits to Silicon Valley firms. While the time was ripe to head out west Judge remained in Atlanta where he currently serves as the Chief Research Officer at Barracuda Networks (which bought one of his companies). He’s currently working on his latest company Pindrop Security, which was exhibiting in Startup Rally’s expo earlier in the day.

Many of the speakers made reference to some of Atlanta’s more well known startups like Sarah Blakely’s Spanx and of course Mail Chimp. Neither company raised venture capital and instead made their money the old fashioned way. Now millions of people are buying Spanx’ products and using Mail Chimp to send out emails in droves. 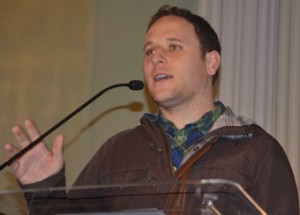 Michael Tavani, the CEO of ScoutMob praised Mail Chimp when it was his turn to speak, noting that he wants to start his next company in Atlanta and do it without venture funding. Tavani’s local deals startup has raised $5 million dollars to date, but it wasn’t easy.

Tavani said growing your company in Atlanta “…forces you to be scrappy, we were forced to find a business model that made revenues early on. Instagram would have never worked here.”

Being scrappy and grinding paid off for Tavani and his team. When ScoutMob launched, they had created enough buzz, through hard work, that investors called right away, as did merchant partners. “It’s easy to make an impact here in Georgia.  There’s a lot of noise in the valley, the impact we were able to make took a much shorter time” Tavani said.

Several other startup founders spoke, as did some of the venture capitalists in Georgia’s startup eco system.

All of this was in celebration of the launch of Startup Georgia the official partner region for Startup America. Case stuck around until the end of the event when he and I had time to talk about how Startup Georgia was still in it’s infant stages of forming back in October during the Startup America Regional Champions Summit. The team behind both events really pulled it off.

This all led up to one of Atlanta’s most infamous entrepreneurs Jermaine Dupri who spoked for about a half an hour on building his business, So So Def Recordings, into a multi million dollar empire, all the while growing it in Atlanta, rather than moving to New York or LA.

A celebration of startups everywhereelse, tickets on sale now at 2013 prices for EE2014, follow this link.