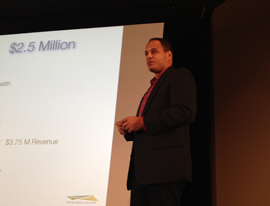 Last year, the inaugural Zeroto510 medical device accelerator was met with phenomenal success. Five out of the six participating teams received follow on funding. Four of the teams received $100,000 dollars. The fifth team, Restore Medical Solutions, went straight to raising a Series A round at $2.5 million.

With results like those, medical device startups across the country are feverishly preparing to submit their applications for the next cohort. One of the secrets to the success of the Zeroto510 program is that it is a joint venture between Launch Your City’s Seed Hatchery accelerator and Memphis Bioworks. Bioworks supplies the lab space, and the deep rooted scientific and engineering mentorship. Launch Your City comes in with the curriculum to prepare the startups for pitching and success on the business side of the world.

When compared to other medical based accelerator and incubation programs, Zeroto510, through their unique partnership, is able to get their startup founders to communicate and pitch at a level understandable to the traditional investor, media and public. In a medically based program, founders and entrepreneurs with scientific and engineering backgrounds tend to get the science, and not necessarily the business.

Bioworks is able to offer a bridge from the surrounding medical community including St. Jude’s, Methodist, Vanderbilt University, the University of Memphis and other high ranking leaders in science and medicine, to offer hands on mentorship to refine these great ideas.

Zeroto510 gets it’s name from the FDA’s 510(k) pre-market notification filing. In laymen’s terms this filing allows medical device companies, with similar technology to something that has gone through FDA approval, to fast track a process which can sometimes take 3-5 years.

Six companies will be selected for the 2013 program. Each company will receive $50,000 in initial seed capital and be part of an intensive, mentorship driven 12 week program of instruction and hands on activities to guide the entrepreneurs through the process.

One of the other factors that makes Zeroto510 successful is the cohort size. By having a smaller group, the same size as the tech accelerator Seed Hatchery, the teams get to know each other better and collaborate more meaningfully. Last years program only featured one Memphis based startup. The other five startups relocated to Memphis for the program and are still, growing their companies in Memphis.

“We received applications from across the United States, carefully selected our six
participants and were very pleased with the quality of their ideas, the spirit of comradery that developed, the levels of learning, and, in the end, with the final presentations that resulted in additional funding. We expect even higher quality in 2013.” said Allan Daisley, director of entrepreneurship and sustainability for Memphis Bioworks.

If you’ve got a medical device startup head over to apply here at zeroto510.com