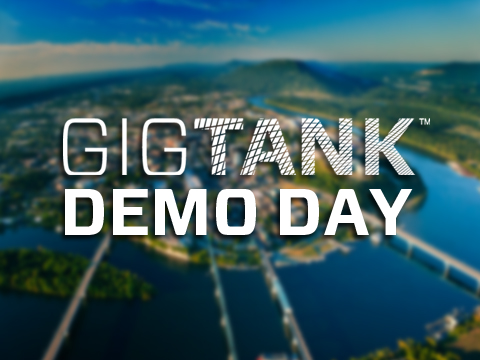 Last year August was Demo Day month in Tennessee. During the month of August (on consecutive Thursdays no less), Chattanooga’s GigTank, Memphis’ Zeroto510, and Nashville’s Jumpstart Foundry all held their demo days. The month of August was a true testament to the strong commitment to startups and entrepreneurship that exists across Tennessee.

We were fortunate enough to attend all 3 accelerator demo days and a variety of startup events that went along with those programs.

This year, Tennessee has condensed it all into one week, sans the Jumpstart Foundry demo day which is on August 22nd.

The week kicks off in Chattanooga, Tennessee today with some pre-events surrounding GigTank’s demo day on Tuesday. On Demo Day, the current class of startups who spent their summer in the GigTank will show off their work. The startup accelerator, now in it’s second year, gets it’s name from being the first accelerator on citywide gigabit ethernet.

The gigabit ethernet, and big entrepreneurial ideas, are why Bob Metcalfe, the creator of ethernet, is the keynote speaker for the GigTank’s big day.

Wednesday the festivities move about 150 miles northwest to tiny Spring Hill, TN. Spring Hill is home to a major GM plant and, this year, the Southern Middle Tennessee Entrepreneur Center’s autoXLR8R. autoXLR8R focused on technologies applicable to the automotive industry, and as per usual the companies will graduate with a demo day.

Finally we head to Memphis where ZeroTo510 will hold their second demo day on Thursday. ZeroTo510 is the first cohort-based medical device accelerator.

Stay tuned to Nibletz all week long for coverage of demo day week in Tennessee and then again August 22 for Jumpstart Foundry’s demo day.

Don’t forget everywhereelse.co The Startup Conference is also in Tennessee, in February!