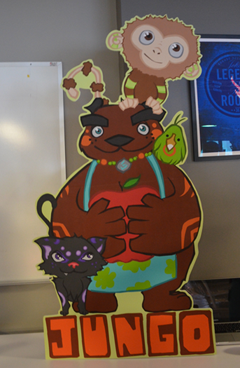 Chicago entrepreneur, investor, community leader and organizer of Startup Grind, Tom Denison, had his biz dev hat on at the Interact Expo at SXSWi on Friday. Denison is also the VP of Marketing and Development for Chicago based Jive Health.

Jive Health is the developer of the game Jungo which aims to help prevent childhood obesity.  According to the CDC approximately 12.5 million children are obese, and when there’s a problem, there’s a startup for that.

Jungo is a really cool interactive game where the child playing needs to make recipes in order to win. For instance, one of the recipes is peanut butter and apples. The game may already have virtual peanut butter, the child would then have to find an apple in their home and take a picture of it.

Jive Health’s founder, Dennis Ai, couldn’t make it to the IneractExpo at SXSW, despite the fact the event was co-sponsored by Andreessen Horowitz. He had an even more important audience on Friday, First Lady Michelle Obama. She is talking to technologists, entrepreneurs and founders who are tackling children’s health issues.

No really we have a TON of SXSW 2013 coverage here