Back in the mid 90’s you were too cool for school if you were using a free web based email service. Hotmail  had surged to the top of the email providers that were called “web based” then, now of course it’s cloud based.  Back in 1997 Microsoft acquired Hotmail for $400 million (that’s about a billion in 2013 dollars).

Around the same time there were other providers out there like Yahoo, Rocketmail and a host of quick up and comers but none had the market dominance of Hotmail.

In 2004 the tables were turned when Google introduced their GMail platform. The attraction was it’s clean look and virtually unlimited space. We’re all too familiar with the ticker that shows just how much data those Google servers are handling.

Now as everyone turns to mobile, it’s been a pretty safe assumption that the next email disruptor would be of the mobile variety. Mailbox app came out with a lot of thunder, despite the fact that I hated it. I like an app called TaskBox but it hasn’t had the big red carpet marketing push that Mailbox had. It was actually their great marketing stunt, making people wait in line, that attracted a ton of attention, a ton of early users and then a purchase by the folks at DropBox.

There have been a few other subtle email disruptions that have come up in the past few years like Sparrow but nothing has disrupted email the way that GMail did nearly a decade ago. 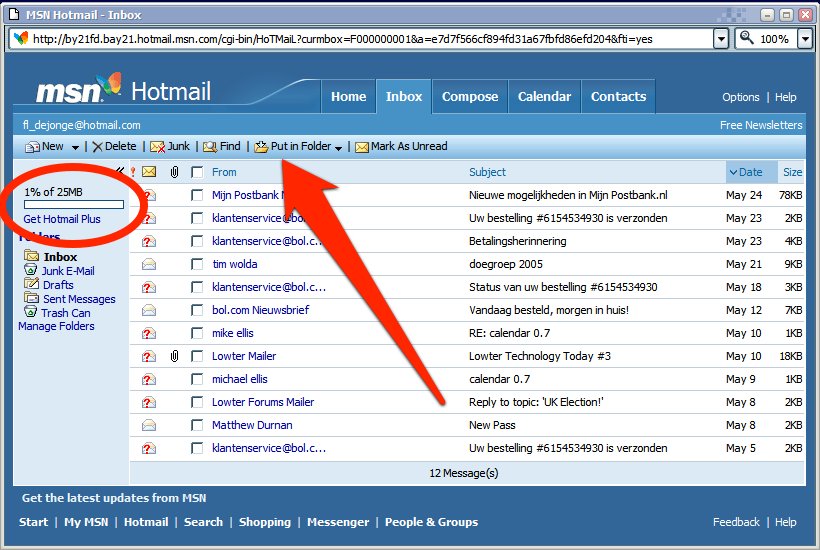 This is how Hotmail looked in the 90’s (image: Business Insider)

Microsoft has just redone their cloud based email platforms. They’ve given a new look to all the various email brands available in the Microsoft cloud. Today, by going over to hotmail.com you can sign up for a brand new Hotmail email adress, a Microsoft live account or Microsoft’s new outlook.com service which was the big thing Microsoft was pushing at SXSW this year.

Gone is the clunky style 1990’s interface that plagued Hotmail and made them look decades behind when it came to competing with GMail. At first glance most users to the new Hotmail may get confused and think they are looking at GMail.

The new interface is extremely clean and the ads have been moved to non-obtrusive boxes on the right side of the page.  Microsoft has also incorporated contacts, calendar and their cloud based Sky Drive as part of the new outlook.com/Hotmail experience.

It would take a lot for me to move off the totally integrated Google cloud that I’ve been chained too for the last few years. My contacts, calendar and mail have been managed by Google for at least the last 4 years. I’ve also been using Google Docs and now Google Drive since they were first introduced. It had actually been a solid 4 years that I hadn’t’ had a Microsoft product on any of my Mac computers (I recently purchased the latest version of Office for Mac).

One thing that could be a game changer for me is how long I can tolerate the newest “compose” screen for GMail. While you can still “temporarily” go back to the original compose style, the new style is extremely hard to manage when you’re trying to get through your GMail as fast as possible.

On iOS it seems that Microsoft accounts integrate just as easily as GMail accounts, however I haven’t used a native Microsoft mail app, nor have I even looked to see if one exists.

For now I’ve got the Hotmail account set up and we will see how it goes. All of my primary mail accounts are still GMail though.

So Am I The Only One On Earth Who Thinks Mailbox Sucks?