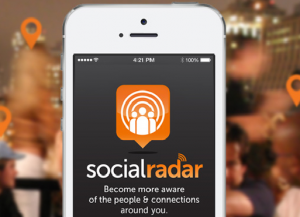 The 10-person team over at SocialRadar is asking, “What Series A crunch?”

Eight weeks after formally founding the Washington D.C.-based company, they are now announcing a $12.75 million round, led by New Enterprise Associates, Grotech Ventures, and SWaN & Legend Ventures. Notable angel investors such as Dave Morin, Steve Case, Kevin Colleran, Ted Leonsis, and others are also joining in.

Today over 1.1 billion people have smartphone devices that can broadcast their locations. Over 2.8 billion people have social profiles online. In the future, the power of your smartphone’s location will inevitably be combined with your social network – allowing you to walk into a room and already be aware of the people around you and how you are connected to them.

SocialRadar believes they are building this technology now.

At the 2013 CTIA expo, CEO Michael Chasen explained that they first developed technology that monitored all the top social networks like Facebook, Twitter, Foursquare, etc. Then, when a SocialRadar user walks into a room, the GPS on their smartphone will locate all the people they might know and explain how they know them. No more standing around awkwardly in a bar, only to realize your best friend from college is sitting just a few seats over. When  you enter the bar, your phone will let you know who’s there.

What differentiates them from other “people finder” apps is privacy. With SocialRadar users control who–if anyone–can locate them.

The company is preparing for their beta launch, coming soon to iPhone and Android. They’re also building a version for Google Glass, which seems to be a perfect fit.

Chasen was formerly a co-founder and CEO of Blackboard, the online learning platform that sold in 2011 for $1.7 billion.