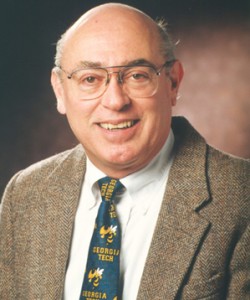 Five years ago, retired Georgia Tech automation professor Dr. Steve Dickerson was getting ready for a seminar on the future of robotics.  In preparation, he asked what the biggest need in robotics was today?  The answer came quickly – automation of the garment industry.

To the Lowest Cost Provider Go the Manufacturing Contracts

Dickerson, a mechanical engineer and entrepreneur, grew up in Commerce, Georgia, where at one time there were three sewing operations. Today, most sewing is done overseas, where manufacturers have sought cheap labor.  Pricing pressures are so intense that clothing manufacturing has moved from China to countries with even cheaper labor like Bangladesh, Indonesia, and Vietnam.  Dickerson plans to change that trend and bring garment manufacturing back to the United States.

Dickerson, who co-founded SoftWear Automation, Inc. with Dr. Wayne Book, envisions technicians specializing in robotics supervising an entirely automated process, which will replace the need for seamstresses in factories and make the United States competitive in the garment industry again.

According to Plunkett Research, Ltd., in 2012 America imported more than $100 billion in textiles and apparel, while exporting only $22 billion. “In order to manufacture in the U.S., [you] have to be automated,” Dickerson says. “[Businesses] have to eliminate direct labor to make it profitable.”

The loss of U.S. apparel manufacturing is not a new problem. In the 1970s and 1980s, government agencies recognized the issue and began developing projects to bring it back. These efforts failed in large part because an economical way to bring the industry back remained elusive — until now. In 2012, SoftWear Automation received $1.2 million from the U.S. government’s Defense Advanced Research Projects Agency (DARPA), which is required by law to purchase military garments made in the United States.

SoftWear Automation’s robotics focus on more than just sewing. In place of seamstresses, the system will guide fabric through machines and transferred from one machine to another.

View all articles by Venture Atlanta