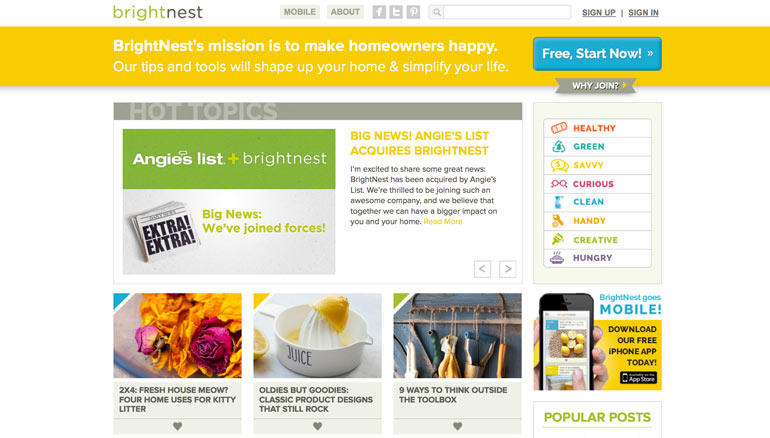 On Friday it was announced that Indiana-based Angie’s list, the worlds largest referral startup, has acquired Denver startup BrightNest.

BrightNest was founded in 2011 in Denver’s River North Arts District.  The startup is a community-based platform centered around homeowners. They offer tips, tools, and ideas that they say will “shape up your home and simplify your life.”

While Angie’s List is a great place to find a handyman to change a door, over the years their offerings have evolved to include contractors, carpenters, and other service people who can help complete long renovation projects and bigger home improvements.

With  BrightNest incorporated into the Angie’s List site, home owners will be able to get suggestions for projects and then find the people they need to work on the projects.

“The only way to transform the local services industry is to solve real problems in a bigger, better, and new way,” Angie’s List Chief Executive Officer Bill Oesterle said in a statement. “With two million members and more than 18 years in this space, no one has better data on local service providers than Angie’s List. BrightNest adds a user-friendly front end and personalized member experience to our marketplace platform which is built on rules, tools and transparency.”

Angie’s List also announced the national rollout of its new communication and scheduling tools. In the second quarter, Angie’s List processed more than 116,000 transactions on its marketplace platform. This represents a tiny fraction of the total transactions that flow through Angie’s List. “We’ve been quietly transforming the way local service is transacted, and we are now in a position to scale it. We will put the platform everywhere our members want it to be, including web, mobile ,and call center,” said Oesterle.

In the new marketplace, Angie’s List can monitor and evaluate each transaction as it progresses through to completion. “If a transaction gets stuck at any point, we are going to step in and fix it,” said Oesterle. “We have the critical mass and the relationships with local service providers that allow us to change service outcomes.”

BrightNest Co-Founder and Chief Executive Officer Justin Anthony echoed Oesterle’s statement. “We’re excited to join a trusted brand and help facilitate the solution to make it even easier to hire local service providers. Our tools and interactive content allow us to tailor a custom experience for every member because no two homes and no two homeowners are exactly alike.”

Under the terms of the acquisition agreement, Angie’s List acquired basically all of the assets of BrightNest for $2.65 million in cash. The cash value included $2.15 million at closing and $0.5 million payable at the one-year anniversary of closing, subject to certain performance criteria. Angie’s List funded the acquisition with existing cash. In addition, Angie’s List will grant options to purchase $3.65 million of Angie’s List common stock to the members of the BrightNest team, all of whom have been retained by Angie’s List. The transaction closed on August 2, 2013.