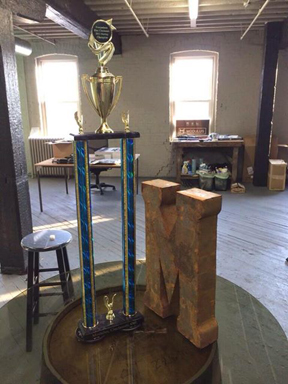 Modulus founder Charlie Key wasn’t looking to win a startup pitch contest when he signed up for this week’s Everywhere Else Cincinnati conference. Key is very active in the local Cincinnati startup community and likes attending startup events. The Modulus team ended up leaving the event with the big ass trophy.

Startups in the Startup Avenue at Everywhere Else Cincinnati participated in the CincyTech, and Cincinnati USA Regional Chamber Startup Poker Run. Over 50 investors and VIP’s at the conference were given five poker chips on Monday morning when they checked in. From 1:00pm-5:00pm that afternoon the investor group was told to check out all of the startups and hand out their chips to the startup they thought was the best. At the end of the afternoon the 5 startups with the most chips got to pitch to the crowd and to a group of judges.

The five finalists were:

Energy Harvesters- a Boston based startup that uses kinetic energy built up through walking and footwear to charge cell phones.

Kids360– a Memphis based startup that helps parents have  a better piece of mind in emergency situations while their children are in the care of others.

Tixers- a ticketing platform aimed at season ticket holders and others that eliminates the risk of tickets not selling on Craigslist or StubHub.

Spacefinity- a Pittsburgh startup in the sharing community that allows people to rent space in their homes, sheds, garages, basements and other areas for others to store their stuff (AirBnb for storage).

Modulus– a scalable application platform for developers that offers node.js hosting, MongoDB and performance analytics in the cloud, based in Cincinnati.

All fives startups made engaging 3 minute pitches and then were put through a 3 minute Q&A session with the judges.

Modulus was the judges’ favorite with Tixer in 2nd place. Modulus was crowned the Everywhere Else Cincinnati 2013 Startup Champion. They received a huge trophy, bragging rights, and startup services including a branding consultation with archer>malmo (a>m ventures) and an investor meeting with Cincy Tech.

Key was surprised that their team had won, and they quickly took their trophy back to the office and shared it with their social networks.

Find out more about Modulus here.