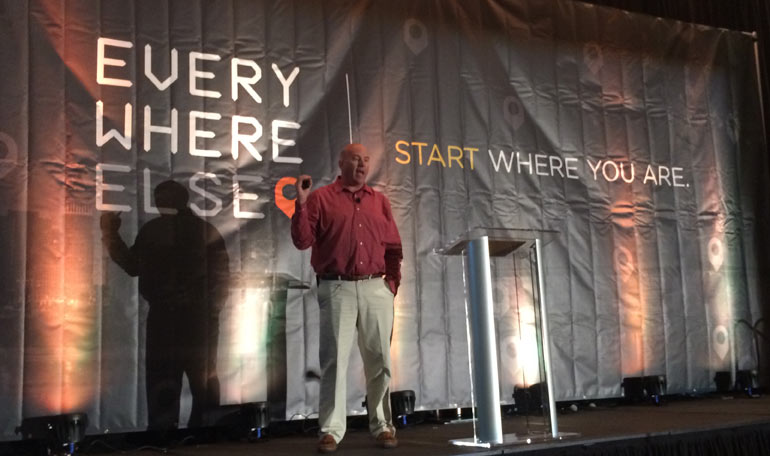 Monday afternoon Priceline and Ubid founder Jeff Hoffman took the stage. For decades Hoffman, an entrepreneur his entire life, has spoken to big corporate CEO’s, sales forces, and countless others in the business world. Over the past two years, when we hear “startup conference” and “Priceline fuonder,” it’s been Scott Case, the founding CTO of Priceline and the founding CEO of Startup America. Case drives home excellent points about startup communities.

After spending most of his career creating business plans (successful ones at that), Hoffman has now turned to building entrepreneurs. He is a founder of Venture Camp, a reality show and accelerator that had it’s inaugural session in an Indianapolis mansion. After the success of the first cohort on film and with their companies, Hoffman is looking to expand the program.

“I set out… to deal with problems that no one is fixing,” Hoffman told the crowd at the Duke Energy Convention Center in Cincinnati.

Although uBid and Priceline have been wildly successful Hoffman said “big companies don’t just appear. Even Priceline was a small startup”.

Hoffman then started in on his 10 points of entrepreneurship:

1. Find Your Purpose– People who are focused on purpose far exceed the people who focus on money. Find the purpose that drives you. To illustrate this example, Hoffman told the story of an employee he had named Chris whose purpose was to get his family out of a trailer and into a real house and nothing was going to stop him.

3. Get engaged in the world around you. Sit next to someone you don’t know. The more engaged you are, the more ideas you come across. “I’m amazed with the network I built because I was just out somewhere doing something,” Hoffman said.

5. Win a gold medal at one thing– Find something, and tune out everything else.  Hoffman explains that many entrepreneurs don’t like this because they worry about the next idea. He then explained that the people that get to work on their next ideas are the ones who won a gold medal on their first idea. He turned to Amazon founder Jeff Bezos as an example: “Bezos always wanted to sell everything, but he became so damn good at selling books, the best damn book seller in the world and with that gold medal built out Amazon. People trusted him on their book sales experience; now they’ll buy anything from him”. Gold Medal= credibility

6.Build a great team- Hire someone smarter than you. “Don’t you want to be the manager with 7 people on the all star team, not the one who has a shitty team because you didn’t want players better than you?” Hoffman asked. Hoffman added that he told his Priceline team once that they could completely change industries on one Friday morning, and they would still win.

7. Get out of your office. The best companies build their product for customers. When Hoffman has a good idea he grabs his car keys to go out and find someone with a wallet who likes the idea.

8. Launch Something- MVP doesn’t mean put a crap product out there. If you go too lean, you’re putting your reputation on the line. “I remember you. You’re Jeff, the crap guy.” Don’t over do the lean thing just to rush something out there. Do two functions of your five function product and crush them. Lean is like throwing shit to the wall.

Needless to say Hoffman does 300 every single time.