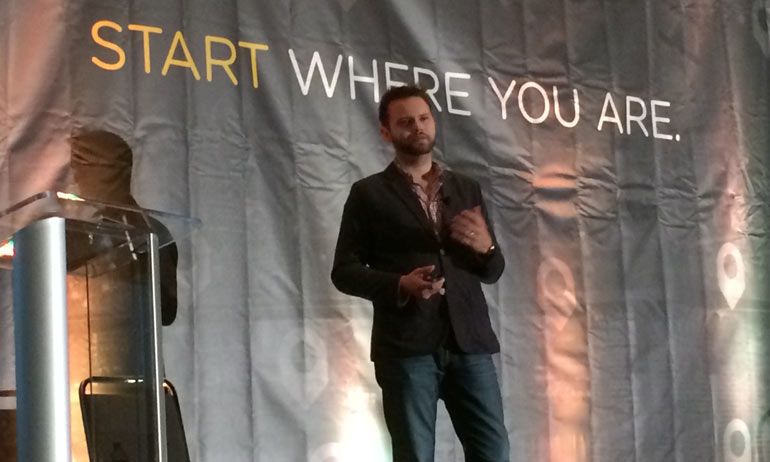 Six decade old advertising agency archer>malmo gave an amazing discussion at SXSW 2013 called “When Bad Names Happen to Good Startups.” It was a candid look at naming mistakes startups make. While sometimes names are an afterthought based on a url’s availability, the folks at archer>malmo and their investment arm  a>m ventures, preach the importance of a name because it’s the foundation of your brand.

Patrick Woods, a>m ventures Managing Director, says “say nodaddy to godaddy” referring to the practice of naming a startup for a URL. That was just the beginning of an amazing presentation at our Everywhere Else Cincinnati conference earlier this week.  What transpired after a brief introduction had the entire audience talking for the rest of the conference. In fact, shortly after the discussion The Cincinnati Business Courier’s Andy Brownfield was so blown away he posted this story.

So the story goes like this: archer>malmo’s Senior Copy Writer Justin Dobbs is a close friend of Woods. “He’s one of the most creative guys I know,” Woods told the audience. So it was a feeling of shock, or possibly being blown off when Woods was recently looking for a gift to get a male friend for his birthday. He figured he would turn to Dobbs’ creative edge to help him come up with something truly amazing. Dobbs’ suggestion? A bar of soap. But not just any soap,

Dobbs suggested a bar of Duke Cannon. Now Duke Cannon is a man’s soap. Its brand isn’t just a brand; it has a personality. Brand is bold, and masculine and their branding is something Woods was successful in driving home.

Their website and brand image is filled with personality. “Tested by soldiers, made in the USA” is one of the rotating graphics that dons the companies web page. “Veggie Burger’s Don’t Mind If I Don’t” is another.

“Duke Cannon doesn’t dine with vegans and he could give a damn about your iPad,” it says on the company’s about page.

Duke Canon’s personality is that of a man, a man’s man. If he walked into a bar he would undoubtedly order something hard.

Woods said startups that use simple descriptors may have found the perfect way to tell what their startup does, but they’re so simple that they are insulting to users.

“When you develop a strong personality, you start moving your startup from a product to a brand,” Woods told Brownfield. “Personality is what your brand says when you’re no longer speaking.”

Nibletz would order a Redbull and Vodka and pizza.