Startup Weekend, the globally famous 54 hour startup hackathon, continues to grow. Next weekend Startup Weekend heads to the Gulf Coast of Mississippi, where Biloxi will play host to entrepreneurs, developers, coders, and their supporters while they hack the weekend away on what could become the next big business.

Startup Weekend Biloxi is being put on by Innovate Mississippi, a public-private partnership thats fueling the economy by supporting startups and innovation across the state.

“It’s our turn,” Stephen Witt, the Executive Director of the Innovation Center told the Sun Herald, “and a great opportunity for the Coast. Pulling together all of the entrepreneurs, designers, marketers, and innovators from all backgrounds and all ages and putting them together for a weekend of creating, designing, and launching new ventures is pure chemistry.”

Startup Weekend Biloxi will follow Startup Weekend’s normal 54 hour format. Entrepreneurs who sign up here, will meet each other over dinner on Friday evening. After that they’ll pitch their ideas in 60 second pitches where the audience will decide which ideas will be worked on all weekend long.

Once the ideas are chosen, the audience will divide up into teams and conquer the startups at hand. They’ll work through the weekend with access to mentors and coaches. Saturday they’ll go through customer discovery and work on their wireframes and pitch decks.

Sunday the teams will put together the finishing touches on their presentations and pitch to the panel of judges. Judges for the Biloxi event are:

Coaches for the Biloxi event are:

You can find out more about Biloxi’s Startup Weekend and register here at startupweekend.org

Last month when we were at the Southland festival in Nashville, Tennessee, we met a lot of great startups from across the Southeast. One of those was PushLocal from Natchez, Mississippi.

You may be thinking, there’s startups in Natchez, Mississippi??

Well yes there are, and that’s what we’re here for, as the voice of startups everywhere else.

Zach Jex is a local Natchez lawyer, businessman, and mobile app developer. He’s developed a handful of apps, but one problem he became passionate about was how to get a community to embrace local news, rewards, and deals. To do that, he had to make sure that deals and information are targeting the right, local customers.

It’s easy for a big chain store to send out a mass market deal to customers in Anytown, USA, because there just happens to be one of their stores in that market, but with all of the noise coming from so many different deals sites and apps, how can the local merchant survive?

That was what drove Jex and the team behind PushLocal to create a new kind of community. It’s almost like Patch on a hyper local level with daily deals, loyalty, and rewards built in.

But PushLocal isn’t just about restaurants and retail. They want it to be the ultimate local destination where real business owners can reach real people. PushLocal is also about the community, which is why in addition to retail and restaurants, you’ll find local businesses, civic organizations, and local government as well. Is the Humane Society doing a special on spay and neutering? Check PushLocal. Is Bob’s hardware store selling snow shovel’s for a dollar? PushLocal would know. Is there a new local festival coming to town? Yup, PushLocal will have that, too.

PushLocal delivers all of those important messages without the noise of the unimportant ones. Check out our interview with PushLocal from last month’s Southland festival. Find out more about PushLocal here at pushlocal.com

This Nashville startup is taking loyalty and rewards to a whole other level. 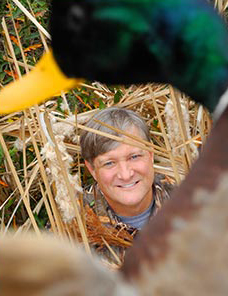 Long time readers of nibletz.com know that we’re big fans of Shark Tank on ABC. Naturally as entrepreneurs, Shark Tank is a must watch show (you can see our Shark Tank coverage here). We’ve even reported on when an entrepreneur on Shark Tank has their deal reneged on after the show airs.

The show puts entrepreneurs from across the country up against some of the most brilliant investor minds there are. Mark Cuban, Damon John, Kevin O’Leary, Barbara Corcoran, Lori Greiner, and Robert Herjavec. All of them are multi-millionaires, and Cuban, the owner of the Dallas Mavericks is actually a billionaire.

In the four seasons the show has been on the air we’ve seen a wide variety of startups pitched in the Shark Tank. Ideas ranging from homemade peanut butter to VIP club service have all been pitched in the tank.

Friday night, February 22, Madison Mississippi startup “Muddy Water Camo” will get their chance to pitch the sharks.  The company’s founders Steve Maloney and Stephen Kirkpatrick were selected out of over 30,000 entries to pitch.  The show is currently averaging 6.8 million viewers per episode.

The company designs and manufacturers camo products ranging from caps, hats, masks, waders, and gear bags, in what onlinemadison.com called “the most realistic camo pattern ever created”

Maloney told onlinemadison.com that they created the line because most camo is designed for deer hunters, not duck hunters.

“I realized that every available camouflage pattern seem designed for hunting deer in the woods,” Maloney says. “None of those patterns looked like the marshes and flooded fields where I was hunting ducks. And it seemed to me that if you’re hunting a bird with webbed feet, your camo really ought to feature water.”

Where the innovation really comes in is how Maloney and Kirkpatrick have created and designed their camo. Their designs are based on photographs and not computer drawings. This allows their camo to be manufactured for any kind of terrain for any kind of game.

“We can make realistic camo for the mountains, the prairies, the forests – any kind of terrain, for any kind of game.” Kirkpatrick said.

Although the founders already know the outcome of their appearance they are sworn by secrecy not to reveal it until after their episode airs.

We’re curious to see how they do, as hunting and camo don’t seem to be in any particular sharks wheelhouse. Lori Greiner, who rotates her chair with Barbara Corcoran, has had lots of success marketing products on QVC, so if Greiner one of the sharks for Muddy Waters’ episode, they may be in luck. Otherwise it’s going to be a hard fight.

Find out more and see how realistic their designs really are at muddywatercamo.com

Typically when we get an email or pitch that has the words “event” and “app” in the same pitch, we get skeptical. The event space is a crowded space and an extremely hard nut to crack. We were actually referred to YeHive by our lawyer who is one of the leads in the firms emerging technologies practice. In other words he sees a lot of startups. I told our lawyer of my ambivalence about “event startups” but he insisted we check it out.

So Thursday morning we got a walk through of YeHive from the startups co-founder Brad Fuller.

YeHive isn’t about event discovery, it’s about making events more social. YeHive combines photos, videos, comments and a timeline to any event. Users can easily create an impromptu event or participate in an ongoing event. When you log into your YeHive account and then an event on YeHive all of your photos and videos get uploaded to the event. You can comment on other users photos and videos and also comment on the events timeline.

YeHive then archives all of the photos, videos and timeline entries, right now “forever”, Fuller told us. If you’ve set up a YeHive for a wedding, birthday party or even a camping trip you’ll be able to go back and check out the memories. If you participated in a YeHive for a sporting event you’ll be able to replay all the action directly from YeHive anytime you want.

Fuller and his co-founders haven’t cut any corners in building out YeHive. The website is built and functioning and for mobile they are debuting in the Google Play store and the Apple iTunes App Store today, simultaneously insuring just about anyone who wants to try it, can.

We got a chance to interview Fuller, check out the interview below.