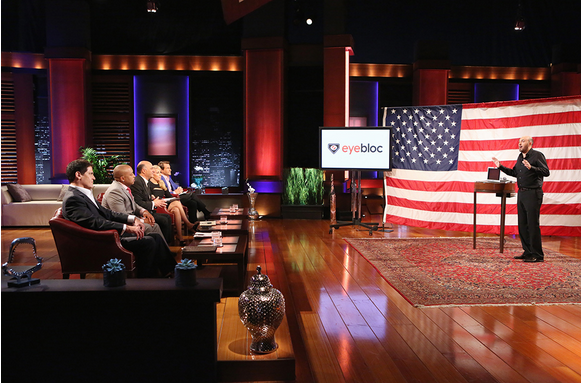 Online privacy has been a buzzy topic since–oh, June or so. Amid revelations that all of our favorite tech companies have knowingly or unknowingly handed over mounds of our personal information to a government some of us trusted, everyone’s still trying to figure out how to move forward in our uber-connected reality.

It seems like insult to injury to realize that those ubiquitous webcams are powerful spying tools in their own right. Schools are spying on kids. Beauty queens are being blackmailed. And, it turns our, Macs aren’t immune.

With these realities in mind, CJ Isakow created Eyebloc, a small clip that slips over your webcam to protect you from unwanted eyes. (Which is probably more convenient than my thumb, which is what I’ve been trying to use since I watched CJ pitch on Shark Tank.)

Why not just use tape or Post-its? CJ has a good explanation for that:

At first I looked at duct tape and Post It Notes for inspiration, but I didn’t like how it left gunk on my computer. Some people are happy with tape or stickers, but I actually like to use my webcam – and a sticky cover makes using it a pain. I also ordered some of the products in the market but they all had adhesives. The ones that claimed to leave no mark also didn’t protect me the way I wanted. Then I bought a bunch of chip clips, thinking I could clip over my laptop. But that (predictably) didn’t really work

With a simple prototype and not too many sales, CJ pitched his product on Shark Tank a few weeks ago. Despite a great pitch, none of the Sharks were impressed. Perhaps the biggest blow came from Robert Herjavec, an expert in cybercrime.

“There’s definitely a market to protect kids,” he said. “I don’t think this is it.”

Well, even experts are wrong sometimes.

The response to Eyebloc late last year and especially after the episode aired convinced CJ that his instincts were good. Maybe the Sharks didn’t see the need–or think he had the solution–but the public sure seemed to.

With growing sales, CJ put Eyebloc on Indiegogo, and he’s reached 1/3 of his goal with 10 days left. He’s taking some of the Sharks’ suggestions to make his product cheaper and sleeker. If they double the goal, though, Eyebloc wants to begin development on protection for video game consoles like Xbox 360.

No one gets it right all the time, and there’s still plenty of time for CJ and Eyebloc to sink. But, at this point, it’s looking like the Sharks may have missed a huge Shark Tank success story.